FSQ (Fast Simple QSO) is a chat like, non-macro based, communication tool that allows for more a more natural conversation style. I have used this extensively on 80m NVIS, 40m NVIS and 2m for about a year with rigs running 24 x 7 out of my home in support of a local emcomm mesh. FSQ is based on MFSK and looks very much like Olivia in the waterfall.

FSQ has some interesting advantages over other digital modes, primarily it is a “group oriented” mode meaning that it maintains a real-time contact list (chatroom type interface) as stations are heard in the waterfall. This happens automatically. As stations send their ID on a timed increment, each station who hears the ID will add that station to a “heard list”. Once a station is on the heard list you have several interaction options with that station.

A few important things you can do are:

FSQ is a standalone application and is my preferred interface however, FSQ is also integrated into FLDigi. For Linux users, I believe this is the only option currently. FLDigi works fine, early on I noticed that the standalone app had a higher success rate for decoding stations, this may have been addressed by now. One nice feature of the standalone application is the ability to run multiple instances simultaneously. This is how my station operates. I am able to run 40m during the day and 80m at night on HF and run 2m, 24×7 using the same PC for both rigs. I have never tried this with FLDigi.

It’s designed to be used on a stationary frequency rather than tuning around the band. Because FSQ sits neatly in the center (1500) of the waterfall and occupies 400hz, it is easy to use FSQ to coordinate the sending of NBEMS forms in an adjacent slice of the waterfall using FLmsg.

How to use FSQ:

Here are the basics of how to use the FSQ Call application.  These screen shots were obtained using the US Edition of the FSQCall appliction.  There are newer versions, however the US Edition remains my preferred version.   FLDigi supports similar functionality, the user interface supports very similar features, it is just arranged a bit differently. 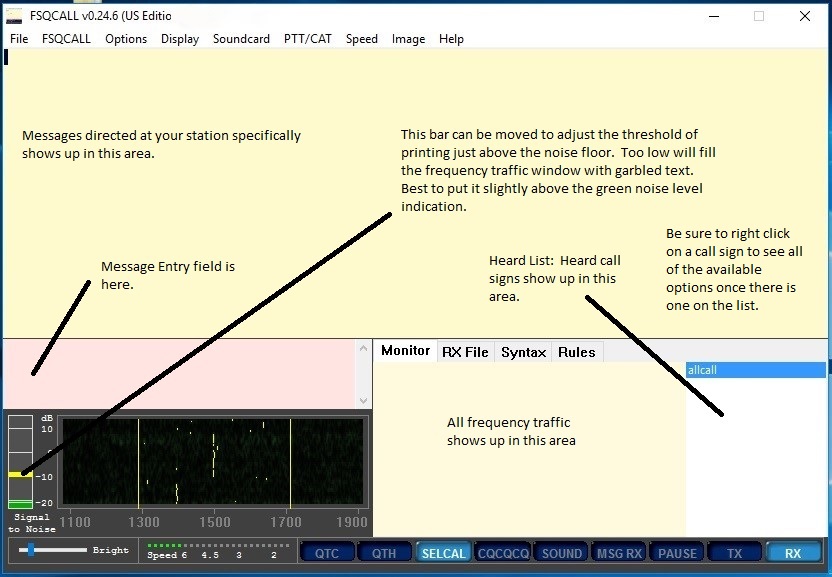 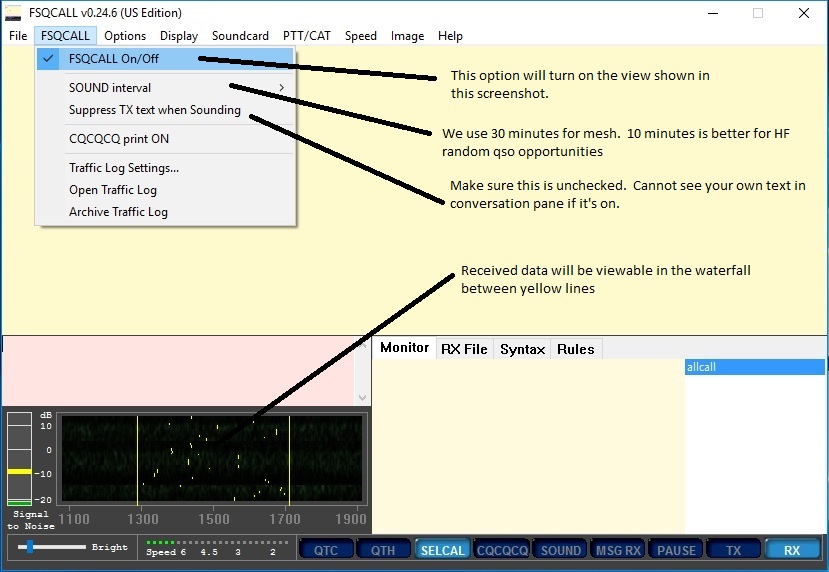 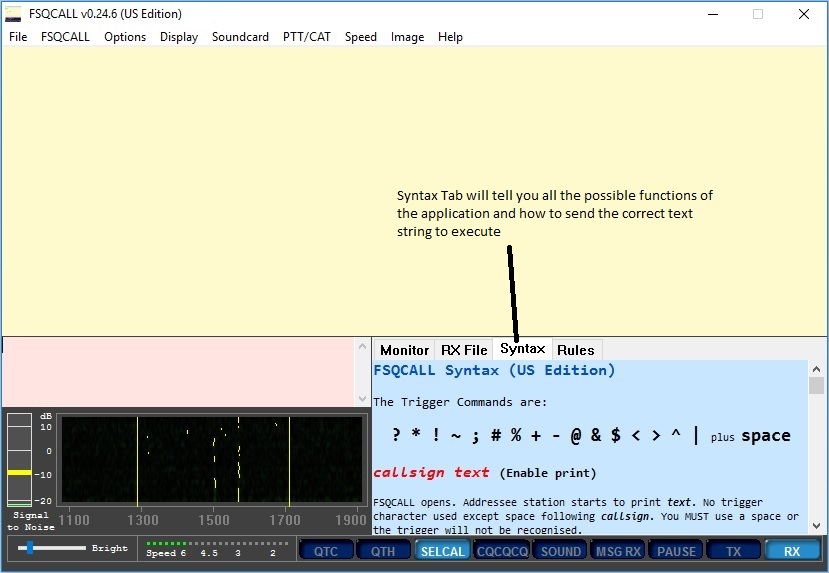 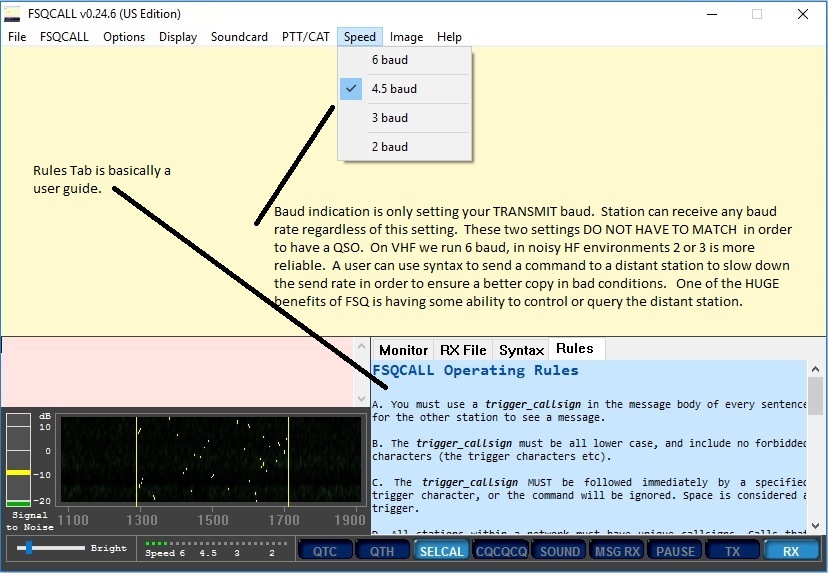 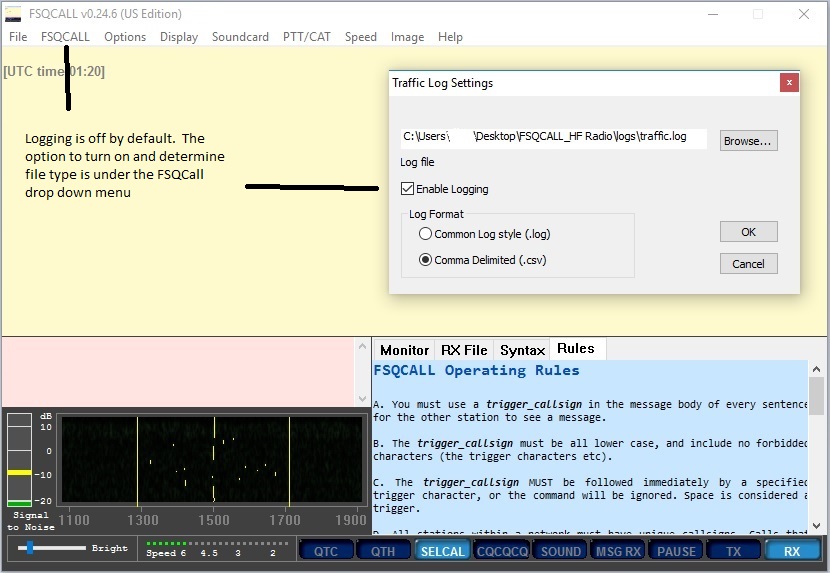 The following are some tips that I’ve picked up while using FSQ:

The FSQ syntax is simply a set of commands that the application will interpret and act on. The syntax characters are simply punctuation characters   ? $ @ & ^ _ * # + | ! ~ %   Each of these characters has a specified function that the FSQ application will take action on automatically.  I’ve included a few common examples below using my call as the “remote station”.  There are many others.

n0jds$•  This will direct the remote station to send back their entire heard list along with SNR. From here you can use this information to relay messages to stations that are not on your heard list but appear on theirs.

n0jds|some sort of text message or information•  This will put a pop up message on the screen of the remote station. When remote station reads the message, FSQ will automatically send an ack message back to the originating station.